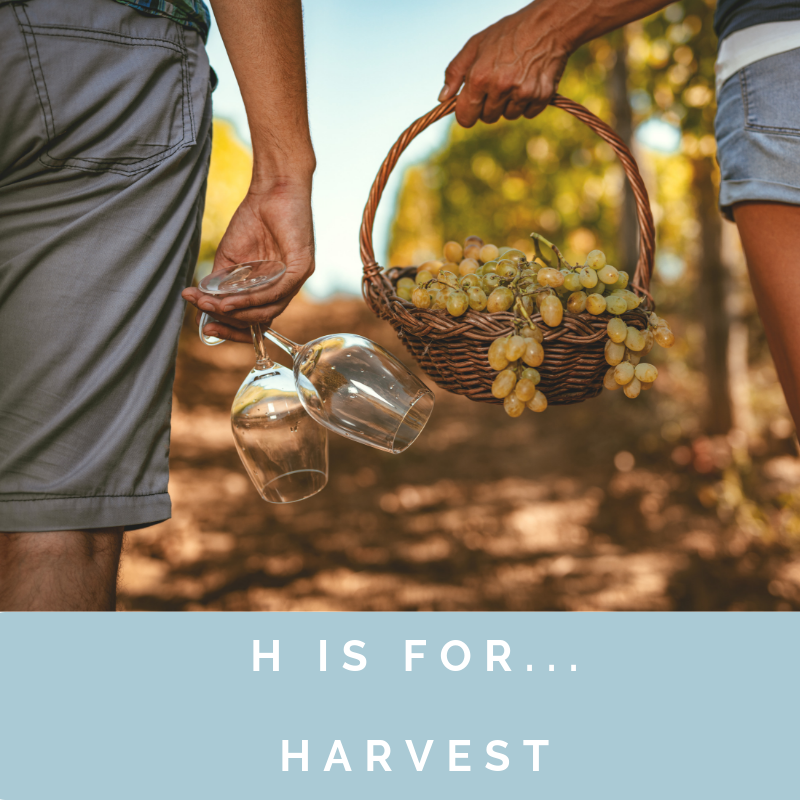 Are you looking forward to harvesting your own crop of fruit or veg?

Of course, H is for Harvest ?

You reap what you sow – or so we are led to believe.

This is indeed true on so many levels with making wine, but sometimes things happen, like the weather, that are completely out of our control.

As harvest time approaches, spare a thought for our wineries and winemakers.

They’ve spent the last 12 months tending to their crops, praying to the gods for a bit of rain, but not too much, warm sunny days and cool overnight winds.

? Finally, the grapes are ripe and the time has come to pick.

Rarely do you see family and friends rolling up their sleeves and pulling on their wellies to crush the hand-picked grapes of the family vineyard anymore.

These days grapes are often picked by machines that work around the clock to harvest the grapes at the optimum time.

Nevertheless, this time of year is an emotional rollercoaster; filled with anticipation, excitement, a bit of fear but hopefully joy and happiness as the harvested grapes turn into well loved wines ? 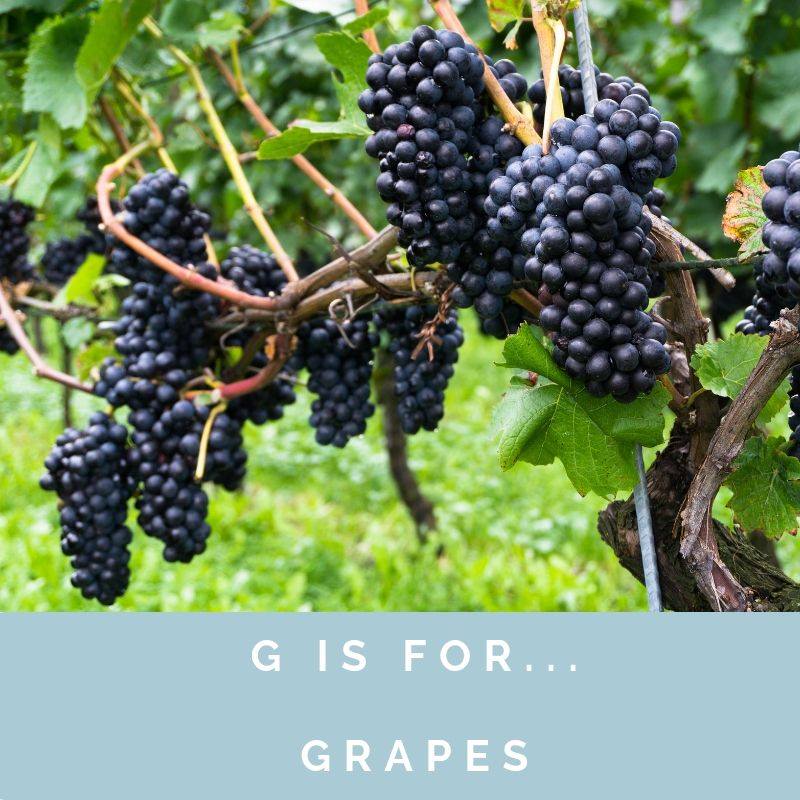 Here’s a question for you… what colour wine do you think comes from these grapes?

Did you say red?

? Well, you’d be correct if you said any of these colours!

Just because the grape is red, this doesn’t mean it only makes red wine. In fact, the juice from all grapes is clear, so all grapes can make white wine.

But in order to be either a rosé or a red wine, the grape juice needs colour, and this colour actually comes from the skin of the grapes.

So, for example, you can’t make blush wine from the chardonnay grape as it’s a white grape – well green really, but these are called white grapes.

But from a red grape you can make red, white or rosé wines, depending on how long you leave the grape skin in contact with the juice, known as ‘must’.

A cabernet or a syrah grape would make a deeper colour much quicker than say a Pinot Gris or a cinsault grape, because of the darker skin colour ?

So the grape in the photo (Pinot Noir) you will find in Champagnes, reds and rosé wines across the world. 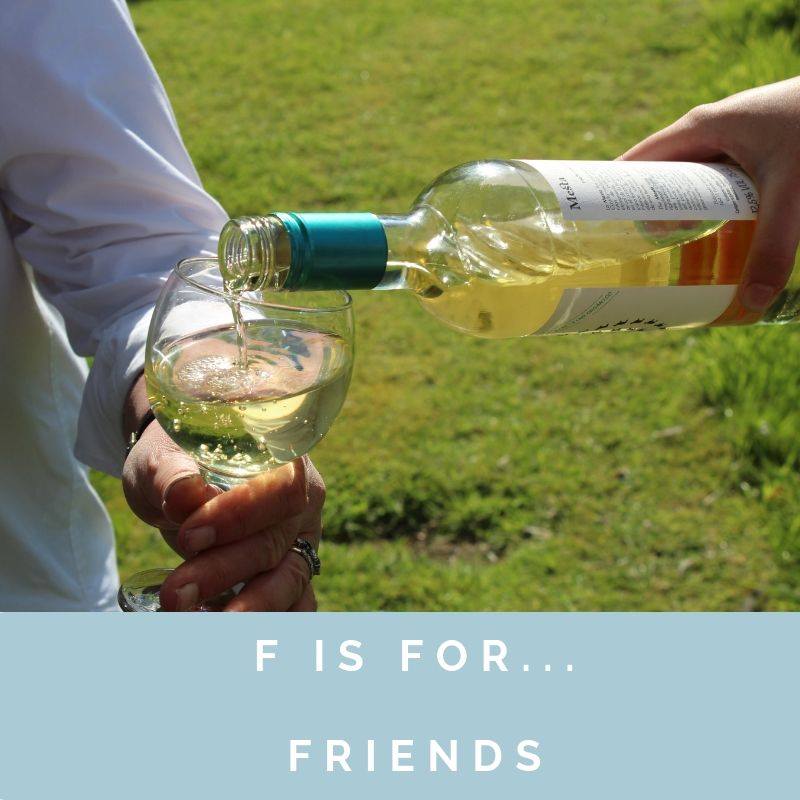 What else could it be?

F is for… Friends

Things we think friends are fantastic for: 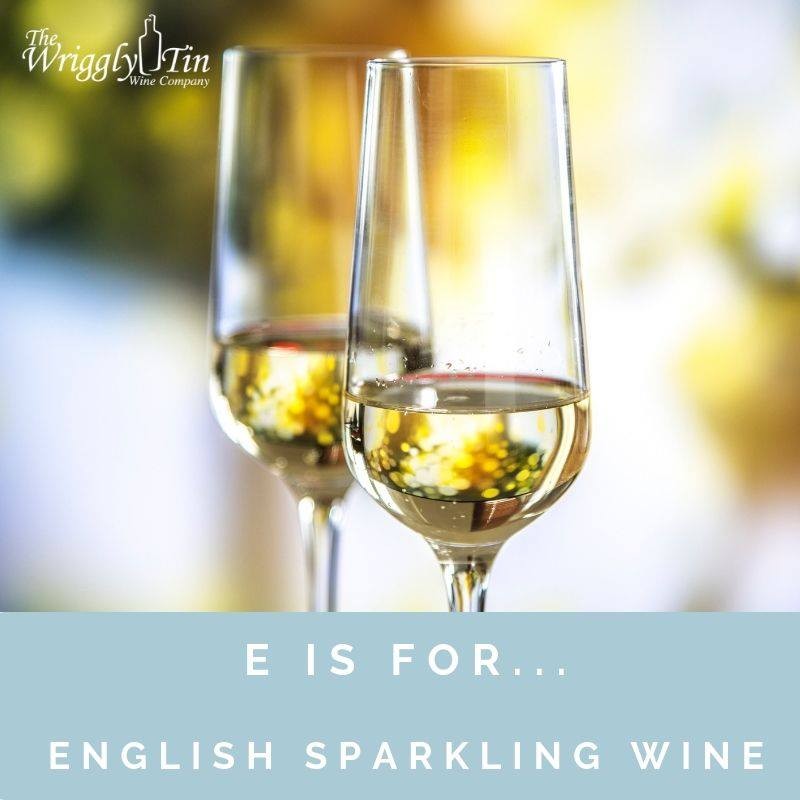 E is for… English Sparkling Wine

A new player has entered the fizz world in the last few years, and it’s perhaps closer than you think.

Homegrown on our very own shores, English Sparkling Wine has packed a punch against its perhaps better known competitors, including Champagne and Prosecco, winning international awards and earning its place against its rivals.

With similar climate and geological characteristics in southern England to areas of France, the opportunity was ripe for English vineyards to enter the market with their very own sparkling wine.

In the past decade, vineyards across England have more than doubled, and last year the UK consumed 164 million bottles of English sparkling wine, a record-breaking year.

Once enjoyed only as an extravagance at Christmas or on special occasions, the introduction of more varieties of bubbles, particularly prosecco, has led to fizz becoming a favourite and popular everyday tipple. 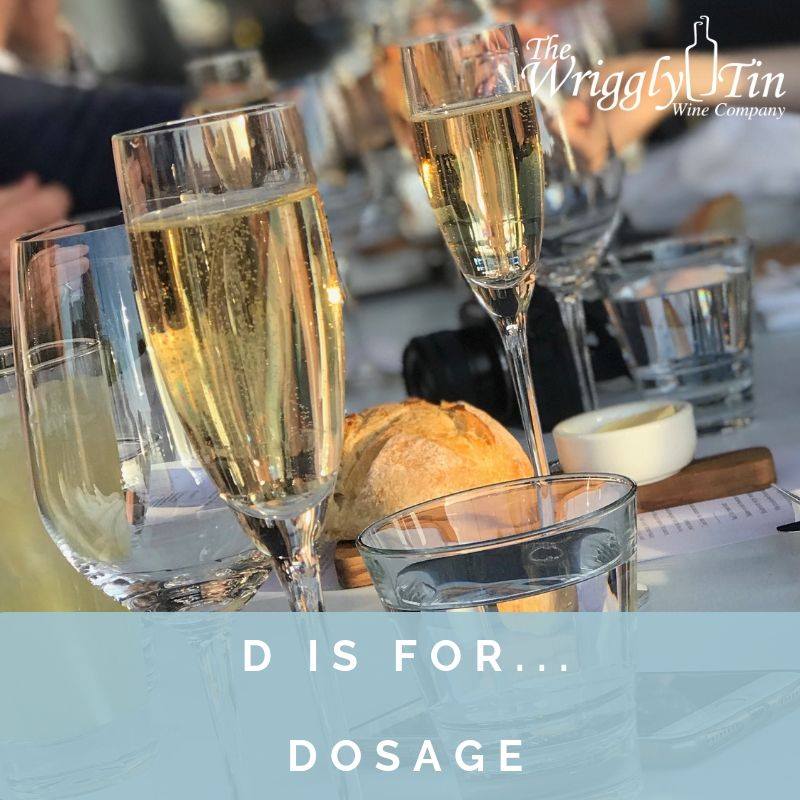 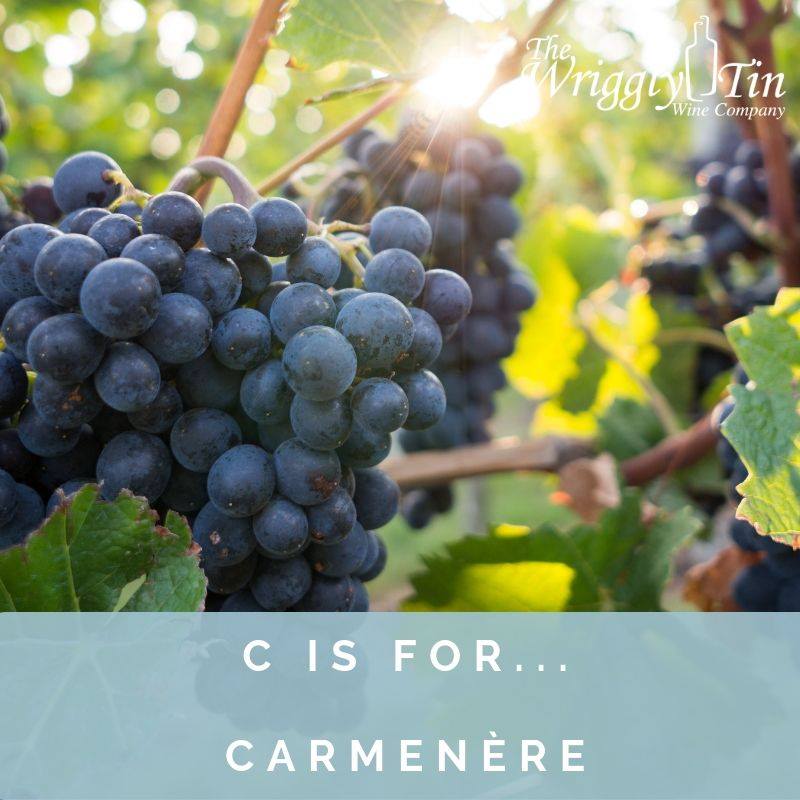 How far would you go to save a grape?

As it turns out, the French would go around the world!

Known as the lost grape of Bordeaux, Carmenère was once a noble variety associated with the region’s fantastic wines.

It was lost for many years when the Great Wine Blight, or the phylloxera virus, ravaged France’s vineyards during the late 1800’s.

The French burned their ancient vineyards to stop the pest from spreading and shipped healthy cuttings of the grapes abroad to save them.

One of the best countries for this was Chile; its sandy soils and cold mountain winds keeps the area pest free to this day, and so the grapes were saved.

However, their story doesn’t end there.

Because of their similarities, the Carmenère vines were confused with Merlot during unpacking and after an epic journey around the world they were lost!

For years, Chile made incredible, award-winning Merlot, eventually arousing the suspicions of the French.

In 1994, the Oneology School in Montpellier confirmed many of these Merlot’s were in fact Carmenère, and the grape was re-discovered!

And so, this noble, once thought extinct grape made its new home in Chile, where it now thrives.

A member of the Carbernet family, the Carmenère grapes produce delicious rich, dark, fruity wines with a hint of smokey spice.

What a journey for a tiny fruit! 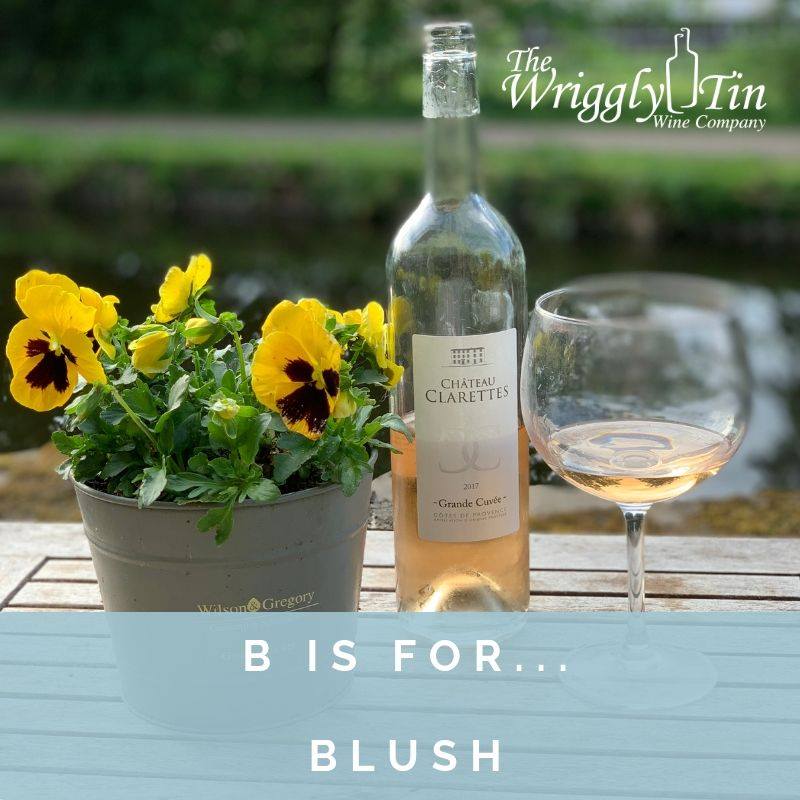 What is a blush we hear you ask?

Some people think it’s down to the sweetness of the wine; blush being sweeter than a rosé.

Others believe it relates to the colour; blush = lighter, richer pinks = rosé.

Actually it can be all or none of the above!

In reality blush is a rosé and rosé is a blush, they are both pink and can be bone dry, fairly sweet or even sparkling. How about that!

Pink wines are growing in popularity in the UK, but beware, wine makers supplying cheaper styles know the current trend is towards the lighter pink salmon coloured blush wines and have all manner of tricks to get the desired shade.

Another reason why we like to buy small batch wines from boutique vineyards! 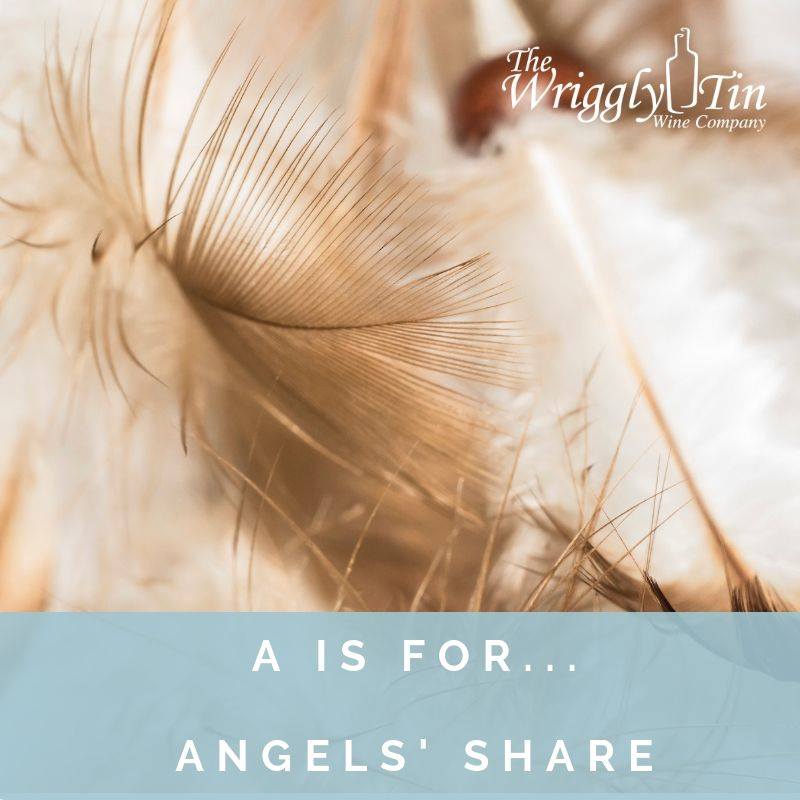 Do you know your chianti from your claret?

Or which grapes make your favourite tipple?

We love learning about wine so we can share what we know with you.

There’s so many fun facts it’s been hard to pick but we’ve rounded up our favourites in our new A-Z of wine. Enjoy! ?

When barrel ageing a wine or spirit around 2% of the contents is lost through evaporation each year.

Known as the Angels’ Share, this is fondly thought of as angels looking over the wine and occasionally taking a sip ?

Local deliveries are free for orders over £50